Following the earliest settlements in the area and his treaty with the Native Americans, William Penn made the boundary of his land the Susquehanna River. No settlers were permitted to cross the river and settle on the Western side until 1729. The first authorized settlement was in that year and was primarily comprised of Germans from the Palatinate. They came with little else in the way of possessions other than their faith. There being no pastors, they gathered around the schoolmaster, Bartholomew Maul, to worship in homes where Maul read sermons and instructed the young in the catechism.

By 1732 there were 400 taxpayers in the area and a pastor from Lancaster would cross on the river on occasion to baptize, marry and administer the sacrament. One of these pastors was John Casper Stoever who had come to America from Germany in 1728 and had begun to organize congregations in what are now Berks and  Lancaster counties.

On September 23, 1733 Pastor Stoever gathered 24 heads of families in Yorktown to form a congregation called “Der Evangelische Lutherische Germind on der Kathores” (The Evangelical Lutheran Congregation on the Codorus.) On that day Pastor Stoever baptized a little girl Maria Catharina Beyer and entered her name in a record book along with the names of the 24 heads of household. That book is still in our possession today. Through this act of baptism, and based on our Confessional understanding, Christ Church therefore considers itself the oldest Lutheran congregation west of the Susquehanna River. Pastor Stoever visited the congregation regularly over the next ten years and he is counted as our first pastor. Meanwhile the school master continued to care for the congregation in between times.

In 1741 the land around the Cordorus was surveyed and lots were laid out for what is now the City of York. The heirs of William Penn donated lots 61 and 62 for a church on what was then known as “Goose Hill.” Tradition has it that the land was to be given either to the Lutherans or the Reformed. The Reformed planned to be on the site at daybreak but when they arrived they found that the Lutherans had already begun to dig a foundation. There is no evidence that this story has any merit in history but it does show the tension that existed in those early days among some of the traditions.

The log church continued to be used as a schoolhouse until 1811 when it was torn down. It is the inside of this Stone church which is famous because of the prints of Lewis Miller, a native of the area and a member of Christ Church who drew a number of pictures of it both inside and outside. The famous print recently appeared on the cover of a recently published book entitled “Theology in America.” As a gift to the congregation for the completion of the Stone Church, a large silver chalice and paten were sent from Germany. They are still in use today.

By 1811 the Stone Church was in such disrepair that it was decided to build a new church which is still in use. It was dedicated in 1812 and considered complete by 1814 when the current steeple was completed. One of the bells in our steeple still bears the date of 1765 and continues to ring out over the city to this day. The clock faces were donated in 1850 from the old colonial courthouse which sits behind the church.

The stone from the old Stone Church was used to build the first three stories of the tower and can still be seen from the inside today.

In the founding days of Christ Church, German was the only language used. But by the early 1800’s some in the congregation began to advocate for services in English and the first service in that language was held in 1820. However issues continued to arise and, as a result, three congregations ended up splitting from Christ to form new congregations. One became St. John Lutheran, which also became a Missouri Synod congregation; one became St. Paul (ELCA) and one Zion (also ELCA). Christ Church gave the Zion congregation land directly behind the church and they stayed there until 1995 when they moved out of town. Christ Church purchased the old Zion building in 2006 and sold it in 2016.

There have been a number of significant individuals associated with Lutheran history in the United States who have served here at Christ Church . Among them are John Casper Stoever 1733-43; John George Schmucker (father of Samuel Simon who was raised at Christ Church and hence was in this area going on to found Gettysburg college and Seminary) 1809-1836. Dr. Schmucker is buried right outside the front door of Christ Church; Dr. Augustus Lochman 1836-1881 whose book of sermons was famous in its day; Dr. Goehring who is buried in the chapel of Christ Church 1789-1807; Franklin Drewes Fry 1958-1971. In the 275 year history here, there have been only 18 Senior Pastors of Christ Church.

Christ Evangelical Lutheran Church occupies a unique position in the history of American organ building. The will of Barbara Schmidt, dated January 7, 1795, bequeathed ” . . .that part of the money arising from the sale of my Estate be applied as follows: part thereof towards purchasing an organ for said Congregation . . .” Sometime between the death of Barbara Schmidt in 1798 and 1803, Christ Church commissioned David Tannenberg, famous American organ builder of Lititz, PA., to build the organ specified in the York widow’s will. In the spring of 1804, the completed instrument was brought to York where Tannenberg and his assistant worked five weeks to install it. This was Tannenberg’s 35th church organ – and his last – for the famed Pennsylvania organ builder did not live to see it completed.While tuning the York organ, which was installed on the rear gallery, David Tannenberg suffered a stroke, fell from the scaffolding, and died three days later on May 19, 1804. The instrument was first played at his funeral services and Tannenberg was buried in York.Moved several times to different parts of the church as the congregation and the church itself grew, the Tannenberg organ was kept in playing condition until 1945 when it was given to the Historical Society of York County. The organ was restored to playing condition and erected at the Historical Society’s headquarters on East Market Street, where it may be seen and heard today. 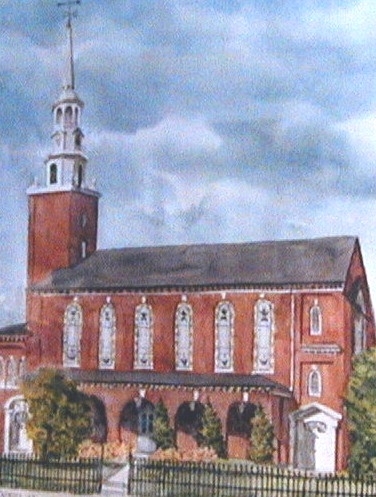 The Archives room located on the second floor of the education building is now open for visitors! The room will be open between services on special Sundays and Festivals from 9:00-9:45 AM or contact Pastor Watt if you would like to see the room during another time. Please stop in and see the rich history of our church. You may be surprised what/who you remember!

Our church is located in downtown York, PA.